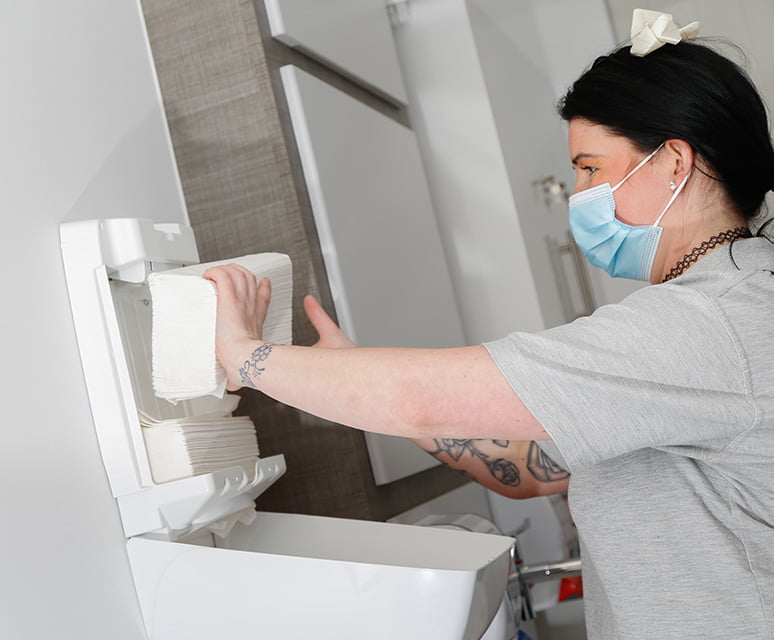 Tea towels. They are pieces of cloth that are brilliant at drying utensils, drying our hands and mopping up spillages when precious coffee has been spilt over the office kitchen counter first thing in the morning.

But have you ever thought about how hygienic they are?

Recently with the outbreak of the Coronavirus and other infectious viruses wreaking havoc on our health, many have suggested for businesses to throw away their tea towels and use single-use paper towels instead.

Now you’re most probably thinking ‘Why? Why should I throw away my tea towel and use paper towels instead?’ Now for those of you who may have already guessed why well done but if you want to know more about the reason why you should throw away your tea towels then keep on reading.

The biggest reason why you should throw away the tea towels that are sat in your office kitchen and use paper towels instead is because they can harbour and spread nasty germs and bacteria like the Coronavirus, Norovirus and E.coli.

It may not be something that you think about but when you reach for your tea towel that has been sat by the office kitchen sink for two days, but think of how many times other staff within your business has used that tea towel to wipe up spills, dry mugs and plates, wipe their hands and how long it has been sat in your office kitchen. (Not a very pretty picture).

In 2018 scientists from the University of Mauritius examined 100 multi-use tea towels that had been used for a month. They found that E. coli was more likely to be found on towels used for multiple jobs such as wiping dishes and cleaning surfaces as well as drying hands.

Of the towels collected, 49% had bacterial growth and of the 49 samples which were positive for bacterial growth, 36.7% grew Coliform bacteria – a group which includes E. coli (36.7% of the other bacteria were Enterococcus SPP and 14.3% Staphylococcus Aureus).

Add the Coronavirus to the mix and you have a potential germ bomb sat in your office kitchen, waiting to make your staff seriously ill.

But aren’t paper towels more impactful to the environment?

Like anything that is produced and manufactured they go through a lengthy process until they end up as the end product. For example, paper towels require trees to be harvested, transported, processed, made and then sold across the globe.

However, paper towels are bio-degradable and if they haven’t been used with chemicals they can be recycled and used as compost or recycled into other paper products – making them greener compared to tea towels with can take years to degrade.

But why switch to paper towels when tea towels can be washed?

Good point, but think about how many people have wiped dishes, mopped spills in the kitchen or on their desk and wiped their hands throughout the day? That tea towel will be teaming with bacteria after a couple of hours. And to stop the spread of bacteria you would have to wash them every day.

Paper towels are much more hygienic as they can be stored in wall mounted towel dispensers (protecting them for bacteria) and they’re single-use – making them great for mopping up spills, drying dishes and wiping our hands and once you’re done with it, you just throw the paper towel in the bin stopping the potential spread of bacteria (remember, Catch it, Bin it, Kill it).

So, if you are in your office kitchen and are wiping the dishes, think of how much bacteria you could be spreading and how paper towels can help keep you and your staff’s health safe.